By Martin Plaut, for The Conversation. 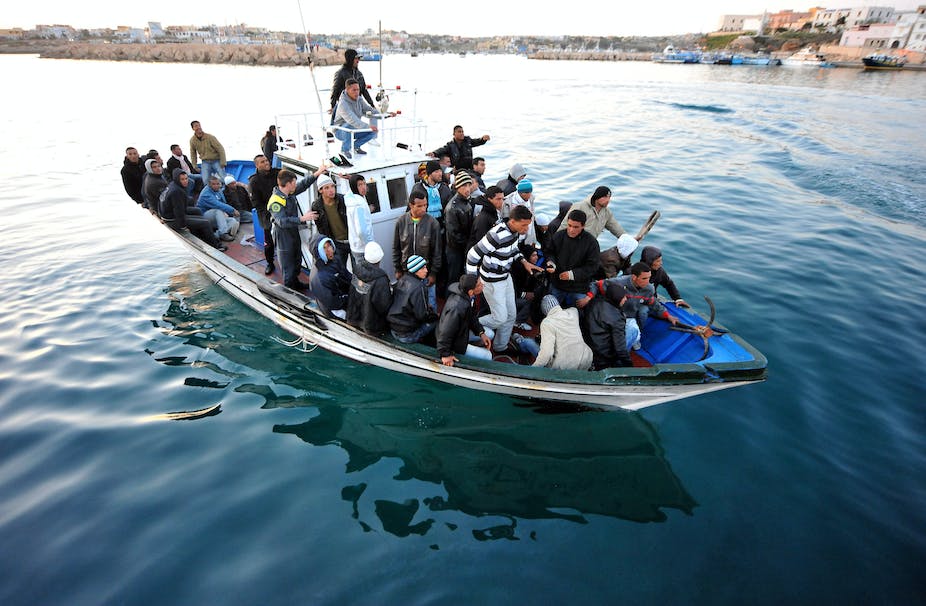 Migrants arriving on the island of Lampedusa, southern Italy in April 2011. EPA/Ettore Ferrari

Early in 2019 the Eritrean government will take over the chair of the key Africa and European Union (EU) forum dealing with African migration, known as the Khartoum Process.

The Khartoum Process was established in the Sudanese capital in 2014. It’s had little public profile, yet it’s the most important means Europe has of attempting to halt the flow of refugees and migrants from Africa. The official title says it all: The EU-Horn of Africa Migration Route Initiative. Its main role is spelled out as being:

primarily focused on preventing and fighting migrant smuggling and trafficking in human beings.

Chairing the Khartoum Process alternates between European and African leaders. In January it will be Africa’s turn. The steering committee has five African members – Egypt, Eritrea, Ethiopia, South Sudan and Sudan. A number of others nations, such as Kenya to Tunisia, have participating status.

The African countries chose Eritrea to lead this critical relationship. But it’s been heavily criticised because it places refugees and asylum seekers in the hands of a regime that is notorious for its human rights abuses. Worse still, there is evidence that Eritrean officials are directly implicated in human trafficking the Khartoum Process is meant to end.

That the European Union allowed this to happen puts in question its repeated assurances that human rights are at the heart of its foreign policies.

The Khartoum Process involves a huge range of initiatives. All are designed to reduce the number of Africans crossing the Mediterranean. These include training the fragile Libyan government’s coastguards, who round up migrants at sea and return them to the brutal conditions of the Libyan prison camps.

The programme has sometimes backfired. Some EU-funded coastguards have been accused of involvement in people trafficking themselves.

The EU has also established a regional operational centre in Khartoum. But this has meant European officials collaborating with the security forces of a government which has regularly abused its own citizens, as well as foreigners on its soil. President Omar al-Bashir himself has been indicted for war crimes and crimes against humanity by the International Criminal Court.

The centre requires European police and other officers to work directly with the security officials who uphold the Sudanese government. According to the head of the immigration police department,

The planned countertrafficking coordination centre in Khartoum – staffed jointly by police officers from Sudan and several European countries, including Britain, France and Italy – will partly rely on information sourced by Sudanese National Intelligence.

The centre also receives support from Sudan’s Rapid Support Forces, which grew out of the Janjaweed: notorious for the atrocities it committed in Darfur.

These initiatives are all very much in line with the migration agreementsigned in the Maltese capital in 2015. Its action plan detailed how European institutions would co-operate with their African partners to fight

Europe promised to offer training to law enforcement and judicial authorities in new methods of investigation and to assist in setting up specialised anti-trafficking and smuggling police units.

It is this sensitive relationship that will now come under Eritrean supervision. They will be dealing with some of the most vulnerable men, women and children who have fled their own countries. It is here that the process gets really difficult, because Eritrean government officials have themselves been implicated in human trafficking. UN researchers, working for the Security Council described how this took place in 2011.

More recently, survivors of human trafficking interviewed by a team led by Dutch professor Mirjam van Reisen, described how the Eritrean Border Surveillance Unit ferried refugees out of Eritrea, at a price.

The danger is that implicated Eritrean officials will play a critical role in the development of the Khartoum Process.

The EU has repeatedly stressed that its commitment to human rights runs through everything it does. Yet the Eritrean government, with which the EU is now collaborating so closely, has been denounced for its human rights abuses by no less than the Special Rapporteur for Eritrea to the UN Human Rights Council as recently as June 2018.

As Mike Smith, who chaired the UN Commission Inquiry into Eritrea in 2015, put it:

The many violations in Eritrea are of a scope and scale seldom seen anywhere else in today’s world. Basic freedoms are curtailed, from movement to expression; from religion to association. The Commission finds that crimes against humanity may have occurred with regard to torture, extrajudicial executions, forced labour and in the context of national service.

The EU itself has remained silent. It is difficult to see how the EU can allow its key African migration work to be overseen by such a regime, without running foul of its own human rights commitments. European leaders need to reconsider their relationships with African governments implicated in gross human rights abuses if they are to uphold these values.

The Khartoum Process may have reduced the flow of refugees and asylum seekers across the Mediterranean. But it hasn’t eliminated the need for a fresh approach to their plight.