(The News is from VOA) 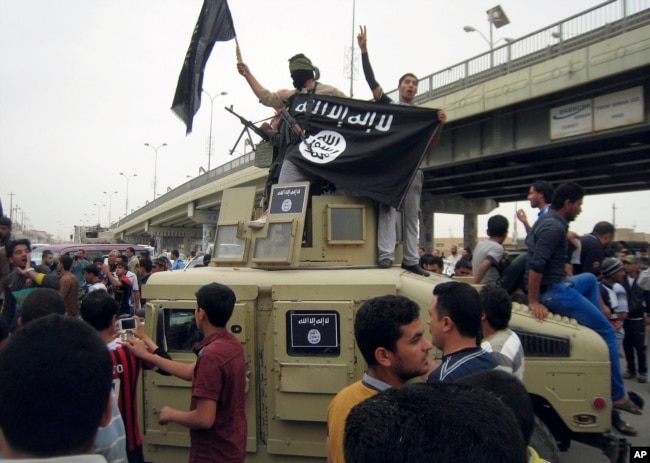 FILE – Islamic State militants hold up their flag as they patrol in a commandeered Iraqi military vehicle in Fallujah, Iraq, March 30, 2014. The terror group found a foothold in Somalia in October 2015, and is working to build up its presence there.

“A so-called Islamic State has emerged in our land and stated to attempt to divide our Mujahidin [jihadist fighters], weaken our strength and carry out assassinations against our own. We have been ignoring their wicked behaviors for some time to give them a chance to change, but they have continued their wrongheadedness,” he said.

“Our senior command has ordered our fighters to attack and eliminate the ‘disease’ of IS and uproot the tree that would be used to undermine the fruits of the Jihad,” Rage said.

The conflict between the two rival terrorist groups has been simmering since the emergence of an IS-affiliated group in Somalia in October 2015. The group found a foothold in the northeastern Puntland state of Somalia, where it began recruiting former al-Shabab fighters before carrying out attacks and assassinations elsewhere in the county.

On Dec. 16, Islamic State reported its first offensive on al-Shabab in Somalia.

On Tuesday this week, IS released a video showing its fighters firing their guns and several dead bodies they identified as al-Shabab members in a mountainous area called B’ir Mirali, southwest of Qandala in Bari region of Puntland. IS claimed to have killed 14 al-Shabab fighters and wounding others.

The IS-affiliated group is estimated to have about 200 active members and is far smaller than the al-Qaida-linked al-Shabab group, which has thousands of fighters in largely rural areas in Somalia.

Hussein Moallim Mohamud, a former Somali counterterrorism officer and national security adviser, said despite having a similar agenda of terrorizing people to achieve jihadist goals inside Somalia, they also have differences.

“Al-Shabab remains predominantly focused on Somali issues and is keen to preserve its allegiance to al-Qaida, while IS is more focused on linking its presence in Somali with international terrorism. Because of this difference each group sees the other to be a threat to its existence,” Mohamud said.

Other analysts previously interviewed by VOA Somalia agree that the IS ideology of promoting global expansion and domination does not sit well with al-Shabab leaders, who prefer focusing mainly on domestic matters.

It is not clear what this would mean to the jihadist groups in Somalia and their fight against the Somali government and African Union peacekeepers in the country.