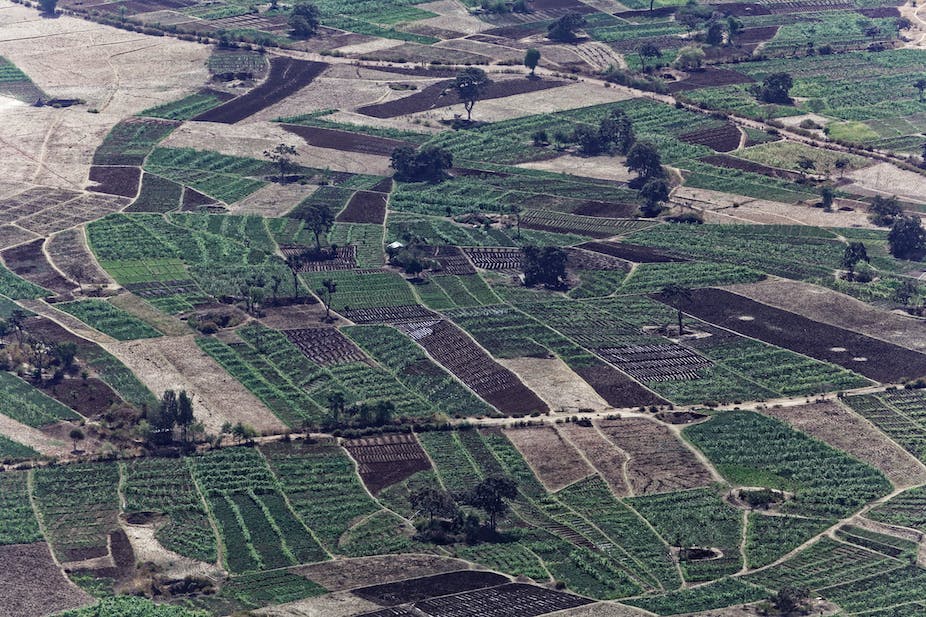 Ethiopia has harnessed the value of irrigation technologies. Shutterstock

(For The Conversation Africa)

After rapid economic growth averaging 10% every year between 2004 and 2014, Ethiopia has emerged as an engine of development in Africa.

And there are no signs that ambitions for further growth are fading. This is clear from the government’s blueprint to achieve middle-income status – or gross national income of at least US$1006 per capita – by 2025. This would see a rapid increase in per capita income in Ethiopia, which is currently US$783, according to the World Bank.

Ethiopia’s growth has been propelled by at least two factors: the prioritisation of agriculture as a key contributor to development and the fast-paced adoption of new technologies to boost the sector.

A third of Ethiopia’s GDP is generated through agriculture, and more than 12 million households rely on small-scale farming for their livelihoods.

One of the drivers of growth in the agricultural sector has been the expansion of irrigation. The country has seen the fastest growth in irrigation of any African country. The area under irrigation increased by almost 52% between 2002 and 2014.

This was achieved by investing in the sector, and by harnessing technology to expand irrigation to farmers who traditionally relied on rainfall to water their crops. This boosted productivity and income for farmers by helping them extend the growing season and become more consistent in their production.

Meanwhile, only 6% of arable land is currently irrigated across the whole of Africa. This means that there’s huge potential to expand irrigation and unlock economic growth.

These factors are highlighted by a new report from the Malabo Montpellier Panel. The panel convenes experts in agriculture, ecology, nutrition and food security to guide policy choices by African governments. The aim is to help the continent accelerate progress towards food security and improved nutrition.

The panel’s latest report analyses progress – and highlights best practice – in irrigation in six countries. These include Kenya, Mali, Morocco, Niger and South Africa. Other African countries can draw lessons from the report’s insights.

The report identified a number of common factors in countries where significant progress has been made to expand irrigation, including key policy and institutional innovations.

In the case of Ethiopia, one of the main reasons for its success is that agriculture and irrigation have been featured on the Ethiopian policy agenda since 1991. In addition, specialised institutions have been set up with clear commitments to maximise the benefits of water control and irrigation systems.

In addition, the government has invested in the sector and has plans to continue doing so. It aims to allocate US$15 billion to irrigation development by 2020.

The investment is expected to deliver a number of returns. These include:

Another major area of development has been the collection of data. This is an invaluable asset that allows for careful monitoring and management of resources such as water, especially in times of drought.

The final results of this mapping in 89 districts revealed nearly 3 billion cubic metres of water at a depth of less than 30 meters. This could allow approximately 100,000 hectares of land to be brought under irrigation, benefiting 376,000 families.

Finally, Ethiopia has harnessed the value of a full range of irrigation technologies. These have ranged small-scale interventions to large infrastructure.

A joint project between the Ethiopian Bureau of Agriculture, local extension officers, and an NGO called Farm Africa, for example, helped women and young people adopt small-scale irrigation. This was part of an initiative to increase their incomes and improve their nutrition.

What other countries can do

In order to have food and income security and to attain broader development goals, countries need to make sure that all levels of government are engaged in planning and implementation. The private sector and farming communities also need to be involved to expand irrigation.

The experience of Ethiopia and other countries leading on irrigation can help other African governments develop country-specific strategies to effectively take irrigation to scale. The benefits of doing so, such as enhancing on-farm productivity and income, and improving resilience and livelihoods, are transformational.

The expansion in irrigated farming, coupled with reliable agricultural inputs and stable markets for the expected growth in farm products, has the potential to catapult Ethiopia to the forefront of African countries that have embraced agriculture as the engine of economic growth.