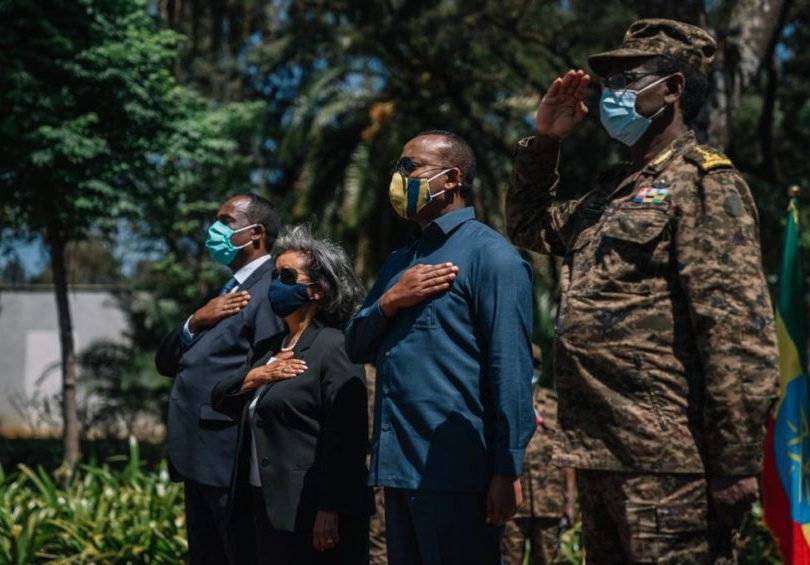 Yonas Biru, Ph.D. (Formerly at the World Bank, Dr. Yonas Biru is an independent researcher of Economics, and a member of the Ethiopian Economic Advisory Council, which is a non-partisan institution).

Ethiopia is governed by ethnic federalism, consisting of nine ethnic states. Tigray is one of the ethnic states, constituting six percent of the nation’s population and is located in the north of the country that borders Eritrea. The constitution allows ethnic states to have special police forces (a misnomer for ethnic army) and armed militia.

On November 3, the Tigray People’s Liberation Front (TPLF) special forces and militia invaded the Ethiopian National Defense Force (ENDF) stationed in the state of Tigray. Tigrayan officers who constituted a significant part of the ENDF breached their oath of allegiance to defend Ethiopia from foreign and domestic enemies and killed their comrades hailing from other ethnic states in their sleep. What one of the TPLF leaders called a “lightning strike,” treasonous Ethiopian soldiers of Tigrayan origin and the TPLF militia invaded two ENDF barracks and confiscated heavy weaponry, including tanks, missiles and rockets. Having neutralized the ENDF in Tigray, the TPLF attempted and failed to take over two other military command centers in the Amhara regional state that borders Tigray to its South. Thus, TPLF’s ultimate goal of marching toward the Ethiopian capital was aborted by the Ethiopian army and the Amhara special forces and militia.

Ethiopia is home to the largest US embassy in Sub-Saharan Africa. Based on information from its embassy, the US documented three important observations. First, TPLF “carried out attacks on the ENDF” that led to “tragic loss of life.” Second, its motive was “to overthrow the Prime Minister and return to the type of privilege they had enjoyed within the Ethiopian State for the last 27 years”. Third, it seems the war “has brought the Ethiopian nation together… in support of the prime minister.”

After having failed to take over the government, the chair of the TPLF and the President of Tigray region, Debretsion Gebremichael, called for a “comprehensive national dialogue” to chart the future of the nation. Soon enough, the US and the European Union (EU) started pressuring the Ethiopian government to dialogue with TPLF. What they are demanding of Ethiopia is what no sovereign nation will do under similar circumstances.

Sadly, the world has different standards for Africa. There is a widespread doubt about whether the people of Africa are ready for democracy. A milieu of explanations has been put forward. Chief among them are that democratic norms and institutions have not developed and the majority of the populace is uneducated and apathetic about who is in power.

This perception has given rise to a political and economic development paradigm that has come to be known as “good enough governance.” Proposed by Harvard professor Merilee Grindle in a paper commissioned by the World Bank, the paradigm encourages African countries to have tempered expectations for their economic and political development endeavors. The pressure on the Ethiopian government is a pressure to accommodate rather than combat the rules of the jungle as an inevitable part of the political reality in Africa.

The Conflict is Not Unionist v. Federalist

Losing its grip of power after the national uprising did not encourage the TPLF to soul search. Nor did it urge it to be a part of the national transformation process. Instead, it continued to push its rejected agenda and opposing any reform in the economic, political and social sphere: “We will not negotiate on the constitutional order we brought,” its leader declared.
The criticism against TPLF came from all political orientations. Mohammed Ademo, a proponent of ethnic federalism and founder and editor of OPride.com, an Oromo news outlet, observed: “TPLF appears stuck between continuity and change, stubbornly choosing the former to resist the fast-paced reforms being ushered in by PM Abiy Ahmed.” Jawar Mohammed, the nation’s leading ethnic federation advocate, also rejected TPLF’s posturing as a “clear indication of intention to renew conflict.”

Understanding TPLF’s history is critical to understand its political calculus that favored the rules of the jungle and nurtured a violent rent-seeking polity. In 1991, the TPLF took the helm of the Ethiopian political structure through guerrilla warfare and seized power by forming an umbrella of a four-party ethnic coalition, the Ethiopian Peoples’ Revolutionary Democratic Front (EPRDF).

Soon after the TPLF controlled the levers of political power, it turned its primary NGO organ, the Endowment Fund for the Rehabilitation of Tigray (EFFORT), into a business conglomerate with an unfettered access to government contracts. Members of the Central Committee of TPLF doubled as high-level government officials and CEOs of the Party’s business enterprises with lucrative bonus packages for keeping their companies profitable. As David Steinman rightly noted in the March 17, 2017 issue of the Forbes Magazine, “Ethiopia’s far-left economy [was] centrally controlled by a small ruling clique that has grown fantastically wealthy.”

It cannot be denied that during its 27 years in power, the TPLF registered impressive economic growth and commendable social development in terms of health, life expectancy, education, and infant mortality. However, its reign over the political sphere was synonymous with kleptocratic autocracy. The Human Rights Watch characterized Ethiopia under the TPLF led EPRDF as “one of the most inhospitable places in the world” and documented some of its repressive regiments, including “murder, torture and rape” that bear “the hallmark of crimes against humanity.”

The Rise of Abiy Ahmed

Ultimately, the TPLF’s unmitigated political dominance, economic extortion and brutal reign were curtailed in April 2018, following a nationwide uprising. Abiy Ahmed was ushered in as the chair of the EPRDF and the Prime Minister (PM) of Ethiopia. The TPLF reluctantly relinquished the levers of power, leaving behind a nation mired in ethnic conflicts, political anxiety and economic despair.

The newly minted PM began the drive for national reconciliation with rapid reforms. He rolled out a raft of fast-paced reforms, beginning with overhauling Ethiopia’s authoritarian policies and laws. Among the first in the cascade of actions were the suspension of the state of emergency and release of over 30,000 political prisoners. This was followed by freeing the press from government tutelage and communist-style control, expanding the political space for competition and announcing a free and fair election for 2020. The US-based Freedom House flagged Ethiopia as one of the five “most encouraging examples of democratic progress over the past two years” in the world.

On the economic front, the new administration initiated a shift from government-controlled to market-led economic system. Ethiopians embraced the PM’s transformative economic reforms as an opportunity to pursue their dreams and hope for a brighter future. The accolades reverberated around the world, as international observers saw the dividend of the reforms crossing Ethiopia’s borders.

In the Financial Times, Professor Paul Collier of the University of Oxford described the change agenda as “an object of fascination around the continent. Success could ignite economic change through emulation equivalent to South Korea’s influence on Asia in the 1970s.” Foreign Affairs, published by the US Council on Foreign Relations, echoed the same sentiment.

There was one party that was adamantly against the change agenda: the TPLF. It led a resistance movement objecting to virtually every facet of the reform agenda, including accusing the PM of “lifting the state of emergency” and “rushing to pardon and release thousands of prisoners…” It also vehemently opposed the paradigm shifting economic reforms.

In short order, TPLF lost its grip and dominance over the nation’s military, security and intelligence apparatuses. For example, 60 percent of the nation’s four-star generals were Tigrayans some of whom were still in office past their mandatory retirement age. Considering that Tigrayans account only for six percent of the population, the new PM retired some of them and replaced them with generals from other ethnic groups.

Even after the reform Tigrayans accounted for over 25 percent of the military top brass. This was still a significant overrepresentation. Losing their total dominance of the military did not sit well with TPLF. Most importantly, losing its control of the economic power-levers was a fatal blow to its status as “the arbiters of power and money.” TPLF leaders started to unceasingly complain that they have been marginalized and left Addis Ababa for Tigray. Soon after, they started building their militia force that reached 250,000 at its peak.

Since leaving Addis Ababa, TPLF created and nurtured conflicts to incubate an opportunity to reclaim its hegemonic power. In 2020, the National Election Board of Ethiopia (NEBE), an autonomous government agency, decided to postpone the national and regional election because of Covid-19. The agency is mandated by Article 104 of the Constitution “to conduct free and fair elections with impartiality and free from any interference in both the federal and state electoral districts.” The Federal government and all regions barring the Tigray region accepted NEBE’s decision and postponed their elections.

TPLF rejected NEBE’s decision, announced that it will not postpone its regional election, and proclaimed if the PM complied with NEBE decision and postponed the national election he would lose his legal standing and legitimacy to rule the country. It argued postponing the election would violate the constitution.

NEBE also ruled that the then planned election in the Tigray region would be a violation of the constitutional order. TPLF shrugged off two constitutional authorities (the NEBE and the Council of Federation) and went ahead with its regional election. Unilaterally, it declared the federal government illegitimate and demanded the establishment of a provisional government to chart the future of Ethiopia. Ultimately, it ventured into a war to take over the government or failing that to extort political concession in a form of power-sharing.

After its botched war adventure that the US said was aimed to “restore its lost hegemony,” the TPLF focused its energy on lobbying the international community to intervene in its favor in the name of averting a bloodshed and regional instability. The international community chose to do TPLF’s bidding. This is both misguided and dangerous. Allowing TPLF to force the federal government to the negotiation table through the act of war will send the wrong message to those who want to have the rules of the jungle to be permanent fixtures of Africa’s political reality.

Sufficient information exists to warrant an investigation of war crime allegations, regarding the cold-blooded massacre of members of the ENDF in their sleep. In addition, reports by the Ethiopian Human Right’s Council and the Amnesty International alleges that TPLF-aligned militia were the culprits of the Mai-Madra massacre of over 600 defenseless Amhara civilians. William Davidson, a senior Ethiopian analyst with the International Crisis Group characterized the massacres as a “violent Tigrayan reprisals.”

On the other hand, a recent New York Times article under the headline “Fleeing Ethiopians Tell of Ethnic Massacres in Tigray War” documented credible allegations of “a campaign of killing” of defenseless civilians perpetrated by “government-allied ethnic militias.”

Nonetheless, this is where the international community’s intervention is justified to advocate for an unfettered access to credible international investigators. Pushing the patronizing “good enough governance” policy is an affront to the hopes and aspirations of over 110 million Ethiopians who are yearning for democratic governance free of the rules of the jungle.

(The views expressed in this post do not necessarily represent the views by East-Africanist).